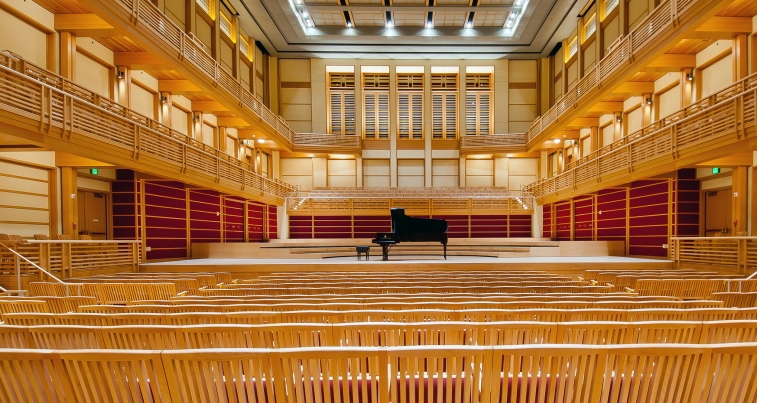 Saturday, on a fine, warm California evening, I went with my mother to hear Brad Mehldau solo at the Green Center in Sonoma. If you’ve never been inside this concert hall you don’t know true beauty. The whole building (seats included) is pale pine which produces a fantastic reverberation throughout the hall. Behind and around the stage is more pine interlaced with deep red sound wall. The aesthetic is poetic, and the design is utilitarian for the acoustics. That is a lot of beauty already, and I haven’t even mentioned how the hall is situated on a beautiful green California hill in wine country overlooking farms and vineyards and mountains. A magical magical place to hear music (I’d seen the alpine symphony performed there and my parents saw the Buena Vista Social Club there which is insanely cool).

Mehldau (as stated) was taking the stage solo to play an exciting combination of Bach, original compositions responding to the Bach pieces, and improvisations. He started with Prelude No.3 in C-sharp Major from The Well Tempered Clavier, then played his composition, “Three Pieces After Bach,” then Prelude No.1 in C major from the same book, and then finally an improvisation on Bach. Mehldau followed essentially this same form throughout the night, coupling Bach pieces (my favorite being Fugue No. 16 in G Minor from Well-Tempered) with “Three pieces after Bach” and an improvisation.

It was really extraordinary to hear Mehldau, a pianist I’d primarily heard play jazz, play Bach. For me it made certain things about Mehldau’s style more clear. His light touch and many aspects of his technique scream classical piano even when he’s playing in a jazz band, but even beyond that his attention to the formal architecture of music (obviously inherent to Bach who basically created it) brings many elements of classical music to Mehldau’s piano playing and composition.

What was perhaps most revelatory to me was hearing Mehldau play jazz right after hearing him play Bach. Maybe this is because I listen to more jazz than classical, but I think it was also undoubtedly the point of the program. Mehldau’s improvisations, performed after the Bach pieces, were at times so wild and free but hearing them following the Bach the listener is actually able to seek out the structure and formal architecture where normally it might be difficult to find. This brought a very cool and different element to his improvisations. At times I’d thrill myself by encountering fugues in his improv!

At the end of the evening Mehldau pleased those in the audience who know him more for his jazz piano (me) by playing beautiful renditions of “How Long Has This Been Going On” and “And I Love Her.” With his first touch of the keys the main theme of “And I Love Her” was introduced, and I was so surprised he was playing it for this crowd after that program. But it was such a crowd pleaser. The way Mehldau treated the theme literally got GASPS from the crowd and made my mom cry. He would just drop it in effortlessly and so lightly it truly floated around us, sometimes barely audible. Mehldau departed so completely from the song throughout the whole middle of the piece that I was certain he’d moved on from it completely, but then at the end he twisted it all back together with the most delicate, gentle flourish (again drawing many gasps). My mom likened the lightness of his playing to Pat Metheny (a guitarist Mehldau has collaborated with a lot) a comparison I see as quite accurate. Both musicians float above each note leaving a little to be filled in by your own imagination.

One thought on “Brad Mehldau in Sonoma, CA”